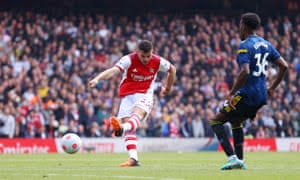 Arsenal took control of the battle to finish in the Premier League top four with a 3-1 win over Manchester United to all but end the Red Devils’ hopes of Champions League football next season.

Sixth-placed United are six points adrift of the top four and could miss out on European football completely next season.

Cristiano Ronaldo scored his 22nd goal of the season on his return to the United side after missing Tuesday’s 4-0 thrashing at Liverpool due to the death of his newborn son.

Ronaldo, will however regret letting Bruno Fernandes take a second-half penalty with the game finely poised at 2-1 to the Gunners.

Harry Maguire was dropped to the bench after a traumatic week.

The England international’s house was searched by police after receiving a bomb threat.

Maguire has been the target for much of the criticism directed at United this season, but the defence was no better in his absence.

Arsenal, took just two minutes to be breached the Red Devil’s defence as David de Gea’s fine save from Saka’s initial effort counted for nothing as Tavares slot home the rebound.

De Gea again stood up well to parry a piledriver from Eddie Nketiah from close range.

Seconds later, Nketiah found the net from another one-on-one.

A VAR review found the England under-21 international offside, but awarded a penalty to Arsenal when Saka was fouled by Alex Telles as he played the ball into Nketiah’s path.

Saka stepped on to send De Gea the wrong way from the penalty spot to double Arsenal’s lead.

Ronaldo hit back within two minutes as he swept home Nemanja Matic’s cross for his 100th Premier League goal.

Tavares needlessly handled a corner into the Arsenal box on the hour.

Ronaldo stood aside to let Fernandes take the penalty, but his compatriot rolled the ball onto the post.

Moments later, Ronaldo had the ball in the net thanks to another smart, instinctive finish but was flagged offside.

Ronaldo then played provider for Diogo Dalot’s shot to be turned onto the post by Aaron Ramsdale.

The relief around the Emirates was palpable when Xhaka restored the two-goal cushion with a powerful shot that flew past De Gea from 25 yards.

Arsenal had lost three consecutive games prior to a much-needed 4-2 win at Chelsea in midweek their top-four campaign.

EPL: Abramovich to buy another club after selling Chelsea