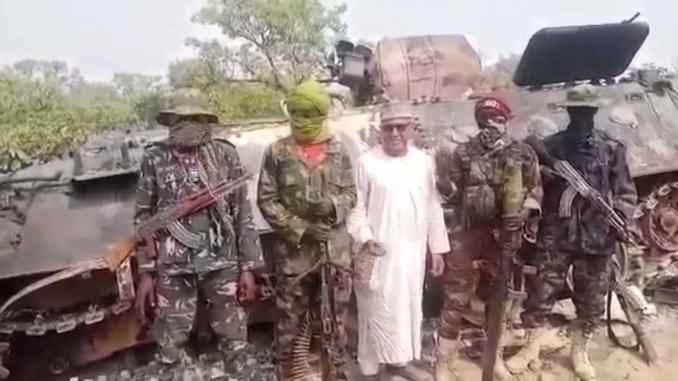 The Managing Director of the Bank of Agriculture, Alwan Hassan has been released by terrorists who bombed the Abuja-Kaduna bound train on Monday last week.

The MD who was travelling to Kaduna was abducted alongside many others who are still being held captive for ten days now.

Before he was released, terrorists released a video showing the Agric Bank Managing Director standing between them.

The terrorists could be seen in military camouflage and in veiled faces to hid their identity, while fully armed.

In the video, terrorists broadcast

to the Nigerian government to do the needful to ensure the release of other captives.

In the video broadcast which was about one minute, twenty one seconds, the terrorists told government that they don’t money, but “government should do the needful.”

Terrorists said: “We are releasing this captive, Alwan Hassan, just because of the month of Ramadan and his plea because of his age.

“We are not interested in money but the government knows what we want and if they don’t act fast to secure the release of the other abductees, we would not have any regret for our action”, one of the terrorists said in the video.

The Bank of Agric Managing Director who was directed to speak to government in the video, pleaded with the Nigerian government to accede to the need of the terrorists so that other captives can be released.

‘’There are many captives with our abductors here and out of pity, they decided to release me and due to the month of Ramadan, I am appealing to the government to save the lives of others with them,’’ Alwan Hassan said.

Though, the terrorists said they didn’t need money, a source close to the negotiation confirmed that a sum of N100 million was paid as ransom.

The terrorists have since confirmed that they were responsible for the Abuja-Kaduna bound train attack on March 28.

Lagos finally rules out return NURTW to Parks and Garages

Senate seeks end to maltreatment of Nigerians travelling to Ghana