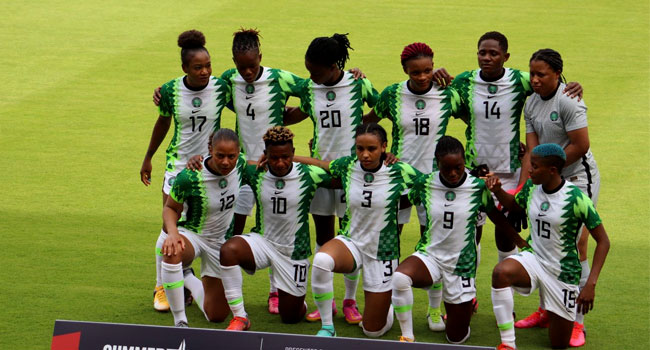 Nigeria have qualified for this year’s Women’s Africa Cup of Nations holding in Morocco after the Super Falcons produced a brave performance to defeat the Lady Elephants of Cote D’Ivoire 1-0 in Abidjan.

The hosts threw all they had in the return leg encounter at the Stade Robert Champroux but met an unshakable Nigerian defence and an inspired goalkeeper Chiamaka Nnadozie who was outstanding.

Coach Randy Waldrum made two changes to the starting line-up from the first leg, bringing in midfielder Regina Otu and forward Francisca Ordega.

The lively Ordega thought she had given Nigeria the lead halfway into the first period but the Nigerien referee ruled it out.

In the 34th minute, Nigerien referee Zouwaira Souley awarded a penalty to the homers after judging that Ashleigh Plumptre had tripped an Ivorian striker in the Nigerian area.

Goalkeeper Nnadozie saved the shot, and the contact from the same player off the rebound went into the side-netting.

The Super Falcons dug their feet into the ground in the second half, refusing to give the Lady Elephants any leeway. Plumptre, Captain Onome Ebi, Osinachi Ohale, and Michelle Alozie all held their ground as the Elephants increased their onslaughts.

A minute to the end, Esther Okoronkwo, winning only her second cap for Nigeria, scored the back-breaker that confirmed a 3-0 aggregate win for the Super Falcons.

Victory and qualification for Morocco 2022 was sweet revenge over the Ivorian ladies who stopped the Falcons from qualifying for the Tokyo 2020 Olympics.