Cameroon 0-0 Egypt (1-3 penalties): The Pharaohs triumphed in a shootout once again to reach the AFCON final, where they will face Senegal 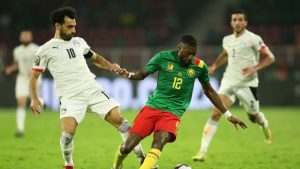 Mohamed Salah will go up against his Liverpool team-mate Sadio Mane in the final of the Africa Cup of Nations after Egypt overcame the challenge posed by Cameroon in their last-four clash on Thursday evening.

The Pharaohs will face Senegal for the coveted trophy on Sunday in a match that will see two of the Premier League’s best wingers go head-to-head for continental glory.

Mane booked his place in the final by chipping in with a goal and an assist as Senegal beat Burkina Faso in their semi-final clash on Wednesday.

It remains to be seen whether he will come out on top against Salah and Egypt, who needed extra time and penalties to snatch a remarkable victory against the tournament hosts in Yaounde.

Salah struggled to get into the game throughout the first half as Cameroon stamped their authority on the contest from the first whistle.

The hosts started well and began to ask questions of Egypt’s defence in the early stages of the match, with the Indomitable Lions feeding off the raucous atmosphere created by home crowd

They went close after just 17 minutes when Vincent Aboubakar struck the woodwork with a headed effort from close range.

Michael Ngadeu and Toko Ekambi missed further chances to hand their side an early lead just moments later, with Cameroon unable to break the deadlock before the interval.

Egypt were forced into mounting their attacks on the break in order to stand any chance of shifting the momentum in their favour as the second half progressed.

However, they often found themselves unable to stay on the ball for long enough, leaving Salah isolated in his role as the Egypt’s main attacking outlet.

The Liverpool ace registered his first shot on target shortly before the hour mark but was unable to cause any problems for Andre Onana between the sticks with a trickled effort from the edge of the area.

He was later denied once again by the Cameroon stopper as he bore down on goal after he was gifted possession on the edge of the area.

Tempers flared in the closing stages of regular time as Egypt manager Carlos Queiroz received a second yellow for bellowing at the officials over an alleged punch on Ramadan Sobhi and was sent off from the technical area, where he was soon joined by his assistant.

Queiroz was far more animated than many of the players on the pitch during the closing seconds, with both sides short of intent and movement as an energy-sapping 90 minutes ended all square.

Clear-cut chances remained few and far between during the 30 minutes added on but Egypt had a fantastic chance to win it at the death only for Sobhi’s driven cross to miss all the white shirts waiting in the area.

The match went to penalties and the Pharaohs built on their experience from earlier in the tournament when they beat Ivory Coast via a shootout to progress.

The Indomitable Lions Cameroon were the architect of their own downfall from 12 yards and Njie’s blase effort which missed by a huge distance summed up their dismal performance from the spot.

The hosts will have the chance to restore some pride in the third-place play-off game against Burkina Faso on Sunday, before Egypt take on Senegal in the all-important final.