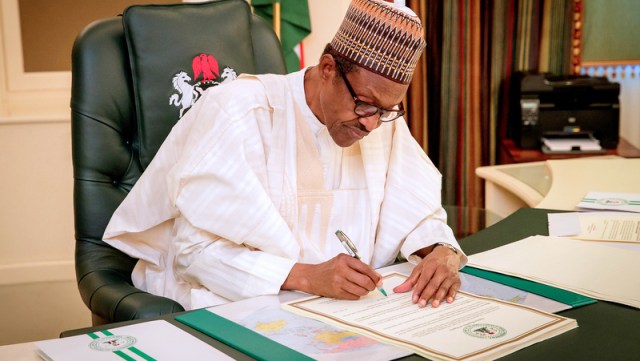 The Presidency has offered reasons why President Muhammadu Buhari has not signed the proposed Electoral Amendment Act.

The Special Adviser on Media and Publicity to the President, Femi Adesina, offered the explanation on Monday in Abuja.

Adesina, who spoke on: “Politics Today,” a programme of Channels Television, explained that President Buhari was consulting widely to do what was best for the country.

He said: “It is work in progress.

“The President still has a number of days within which he should sign the bill into law.

“Be rest assured that the President would do whatever is good for the country at any given time.

“So it is work in progress and there’s still a window of days.”

“We can’t preempt him.

“He will do it at the appropriate time.”

“So you can be sure that every bit on the way, the AGF is carried along.”

On if the President would sign the proposed bill, Adesina said: “The President is there to make sure that things go well in the country and to ensure that processes are enhanced and the new law would enhance our electoral process in different ways.

“So the President would look at that critically and would do the best for the country.

“Those mounting pressure on the president before are the same people.

“It could be because maybe they had some sinister motives in the previous law which could have served their purpose and that one was not signed for legitimate reasons.

“And one of the reasons the previous one was not signed was because of the short time within the election and there was a minimum time in which it should be brought.

“But this one was brought in good times.

“All I am saying is that as long as it would serve our democracy well, serve our electoral processes well and serve Nigeria well, the President would do what is needed.

“In terms of casting his image on democratic values, that image is made already.

“Under President Buhari, one election after the other has been better.

“The ruling party has lost several elections, he didn’t do anything about it.

“It used to be that whoever was in power won all the elections either by hook or crook but not under President Buhari.

“So whether the electoral act is signed or not, it wouldn’t detract him from that reputation.”

Lawan: Erring oil companies must be penalized for negligence