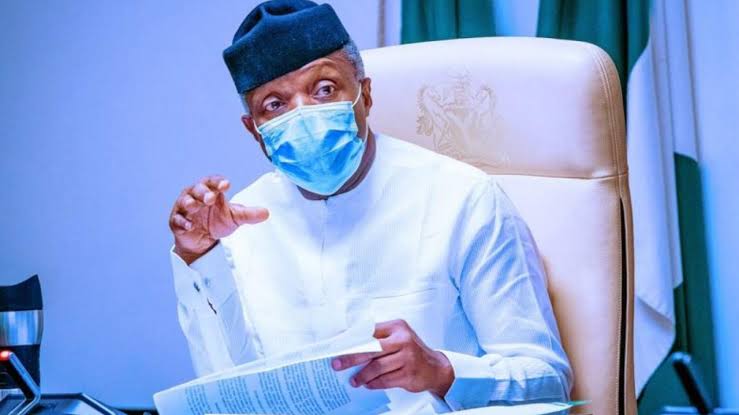 The Federal Government on Thursday, reiterated its commitment to reposition the gas sector for effective service delivery.

The News Agency of Nigeria (NAN) reports that the conference organised by the Abuja Chamber of Commerce and Industry (ACCI), has as its theme: “Energy Transition: Gas as the Fuel of Choice”.

Osinbajo, represented by the Minister of State for Power, Goddy Agba, stressed the importance of gas in actualising energy transition.

“Gas is cleaner than coal or oil and initially was touted as a critical transition fuel.

“Later, climate change policy, particularly in the West, began to turn against gas with very strict policies from many lenders against even funding upstream, midstream or downstream gas projects.

“This has created the scenario we face today with insufficient gas investment without commiserate replacement by renewable leading to scarcity and high prices,’’ he said.

While restating Nigeria’s commitment to lead local and global discussions on the position of gas in the new world order, Osinbajo said that the Federal Government had given the go ahead for the Nigerian Liquefied Natural Gas Train 7.

According to him, Train 7 is more than N10 billion investment that will keep Nigeria in the top five globally in Liquefied Natural Gas and position the country to benefit from the critical role that gas will play in the Energy Transition.

He pointed out that the Federal Government inaugurated the Decade of Gas under the Ministry of Petroleum Resources.

“Mr President said on March 29, when we declared 2020 as “The Year of Gas” In Nigeria, it was to demonstrate our resolve that gas development and utilisation should be a national priority.

“Now, we are going a step further to dedicate this decade to industrialising Nigeria using gas.

“As part of the Decade of Gas, the Ajaokuta-Kaduna—Kano Natural Gas Pipeline set for completion in 2023, will not only allow for gas power and industries across Nigeria but will also create the ability to ramp up renewable.
“This is as we will have base load power to balance intermittent solar power plants that need to be built to meet our climate goals.

The vice president, however, expressed concern over inadequate investments in energy to meet net-zero targets.

“There is simply not enough investment in renewable to support the intended accelerated pace of removal of Fossil fuels.

“Unfortunately, investment in fossil fuels has also dropped by 40 per cent since 2015 without the requisite ramp up in renewable.’’

According to Osinbajo, if we have learnt anything over the past few weeks is that the Energy Transition will not be easy, it will not be seamless and it will not be done without difficult choices.

The vice president said that the risks of trying to make 30-year commitments in reaching net-zero were plain and apparent for all to see.

“The Economist reported that since May, the combined prices of oil, coal and gas increased by 95 per cent. It was also reported that Britain has turned back on some coal-fired power stations.

“I surely believe that the Energy Transition was not meant to make energy less available and unaffordable.

According to him, the gas commercialisation agenda, the Autogas initiatives and other policy response have provided much needed answers to Nigeria’s need for energy transition.

“Basically, we are saying we need gas it is good for us and gas is cleaner,’’ Rasheed said.

According to him, the tempo is how we can increase our capacity to produce more gas.

People ask the question we flare a lot of gas why can’t we use that for cooking gas but it is not exactly the same.

“It is like you have water in the river, but that do not necessarily translate to drinking water.

“The gas needs to be processed for it to be useful for domestic consumption,’’ he said. (NAN)