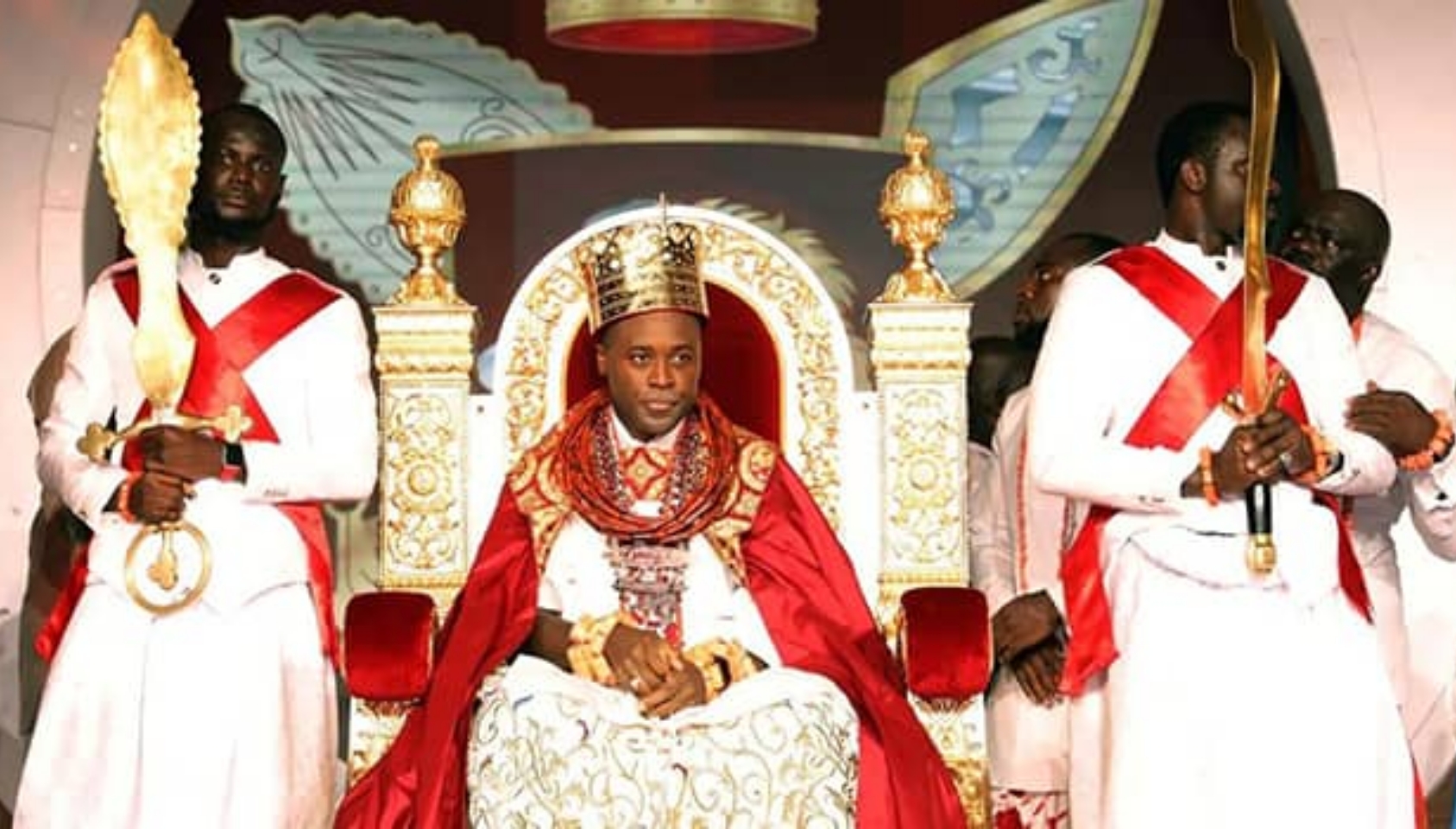 After the conclusion of all pre coronation rites which included  Ninety days isolation period, the Ogiame Atuwatse III, formerly known as Omoba Tshola Emiko, has been crowned as the 21st Olu of Warri Kingdom.

This follows a series of activities lined up for the coronation of the monarch who ascended the throne on Saturday.

Such activities include colourful dance performances by various cultural groups and pleasant musical renditions from the Warri Royal Choir and Laz Ekwueme Orchestral, among others.

Shortly after his arrival at the venue of the coronation, all sons of Itesekiri were asked to remove their hats.

One of the high points of the event was the selection of a ceremonial sword by the Olu while being blindfolded among 20 others.

But one of the 21 swords which bear the names of his 20 predecessors is usually left unnamed.

According to the high chiefs in the kingdom, the monarch is expected to use the name of the predecessor he picks as his title throughout his reign as the 21st Olu.

In the event where he picks the sword that has no name attached to it, the monarch is at liberty to announce a new title or pick that of any of the predecessors of his choice.

Meanwhile, he performed three symbolic chores for the last time which included fetching water in a clay pot, splitting wood with an ax, and paddling a canoe.

President Muhammadu Buhari was represented by the Deputy President of the Senate, Ovie Omo-Agege, whose mother hails from the Warri Kingdom.

The coronation of the new Olu of Warri also enjoyed the presence of many dignitaries from various parts of the country, including political leaders and traditional rulers.

Some of the traditional rulers and dignitaries also in attendance include the Ooni of Ife, Oba Adeyeye Ogunwusi; Obi of Onitsha, Alfred Achebe; Aare Ona Kakanfo of Yorubaland, Gani Adams; and President of the Nigeria Football Federation (NFF), Amaju Pinnick.

Ogiame Atuwatse III, a descendant of Olu Akengbuwa, was born on April 2, 1984, in Warri to the then Prince Godwin Toritseju Emiko, who later became the 20th Olu of Warri, Ogiame Atuwatse II, and Gladys Durorike Emiko.

He attended the NNPC Primary School in Warri for his primary education and later Adesoye College in Offa, Kwara State for his secondary education between 1995 and 2001.

From there, the monarch proceeded to Case Western Reserve University, Cleveland, Ohio in the United States where he obtained a Bachelor of Arts between 2002 and 2006, majoring in International Studies and Political Science with a minor in History and Economics.

In 2007, he earned a Master of Science Degree in Management from the same university.

The Olu is an avid sportsman, having participated in different sports including swimming, kayaks, basketball, American football, and soccer.

Following his return to Nigeria in 2008, he served in the Public Affairs Department of the National Petroleum Investment Management Services for the National Youth Service Corps (NYSC) scheme.

Thereafter he worked as an officer at the Shell Nigeria Closed Pension Fund Administrator and later at Sahara Energy as Government Relations Officer between 2010 and 2012.

As an entrepreneur, he founded Noble Nigeria Limited and Coral Curator limited.

He is also the Chairman of Ocean Marine Security Limited, as well as a Director in Gulf of Guinea limited, Vessel Link Big Limited, among others.

The monarch is married to Ivie Uhunoma Emiko, daughter of Edo business mogul, Idahosa Okunbo, and they are blessed with three children.