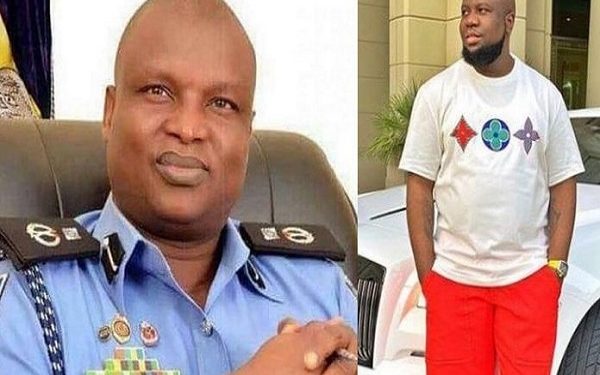 This was after the police chief was mentioned as a beneficiary in an international fraud case of $1.1million involving Hushpuppi and his crime syndicate.

Hushpuppi had earlier told U.S. prosecutors that he gave Mr Kyari part of the proceeds of the crime.

He said he also got Mr Kyari to arrest one of the Nigerian accomplices when they had a disagreement.

This was disclosed in a plea agreement document on Wednesday.

“Court documents outline a dispute among members of the conspiracy, which allegedly prompted Vincent to contact the victim and claim that Abbas and Juma were engaged in fraud.

“After this contact, Abbas allegedly arranged to have Vincent jailed in Nigeria by Abba Alhaji Kyari, 46, of Nigeria. According to the affidavit, Kyari is a highly decorated deputy commissioner of the Nigeria Police Force who is alleged to have arranged for Vincent to be arrested and jailed at Abbas’ behest, and then sent Abbas photographs of Vincent after his arrest. Kyari also allegedly sent Abbas bank account details for an account into which Abbas could deposit payment for Vincent’s arrest and imprisonment,” the plea agreement document read in part.

Refuting the claims by Hushpuppi, Kyari on Thursday took to his official Facebook page and said no money was paid to him.

According to him, Hushpuppi, two years ago, alleged that the life of his family members was threatened by one Vincent who was arrested but later released after it was realised that nobody’s life was threatened.

“Abbas who we later came to know as Hushpuppi called our office about 2years ago that somebody in Nigeria Seriously threatened to kill his Family here in Nigeria and he sent the person’s Phone number and pleaded we take action before the Person attacks his family.

“We traced and arrested the Suspect and after investigations, we discovered there wasn’t an actual threat to anyone’s life and they are long-time friends who have money issues between them hence we released the Suspect on bail to go and he was not taken to any jail.

“Nobody demanded a kobo from Abbas Hushpuppi. Our focus was to save people’s lives that were purported to have been threatened,” Kyari said.

The police boss also claimed that Hushpuppi once admired some of his outfits and sent N300,000 to his tailor to design the same outfit for him.

He stressed that the money was paid directly to his tailor and not him.

“Nobody demanded any money from Abbas Hushpuppi and nobody collected any money from him. We responded to a distress call he made on the threat to his family and released the Suspect when we discovered there was no life threat from the Suspect. This is the true story. Vincent is alive, he can be contacted.”

Kyari said further that his hands are clean and he has nothing to do with the “fictitious Big Money,” fraud that Hushpuppi was involved in.