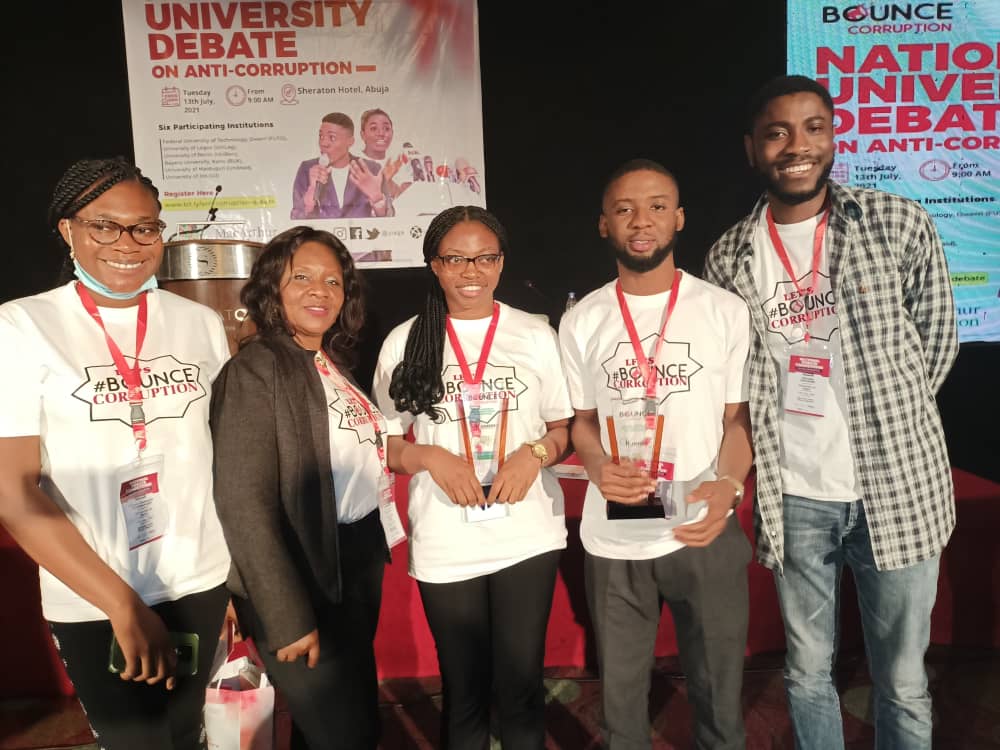 Yiaga Africa, a Civil Society Organisation (CSO) has co-opted students in tertiary institutions and youths to join the anti-corruption fight.

According to Yiaga, this is by amplifying their voices on the values of integrity, transparency and accountability.

The Director of Programmes, YIAGA-Africa, Cynthia Mbamalu, said this at the Bounce Corruption National University Debate Competition on Anti-Corruption organised by Yiaga Africa with support from Mac Arthur Foundation in Abuja.

The debate was designed to complement efforts by state and non-state actors in the fight against corruption by promoting zero tolerance for corruption and impunity through effective citizen’s oversight and mobilisation for accountable governance.

Mbamalu said that the need for students to join the anti-corruption fight became imperative because corruption activities were becoming a worry to all and it would take youths’ collective effort to end.

She said that it was estimated that at least 582 billion dollars had been lost from Nigeria since independence due to corruption, while N1.3 trillion of public funds was reportedly laundered between 2011 and 2015 alone.

“It is thus not surprising that Nigeria rank 149th out of 179 countries on the 2020 Corruption Perception Index rankings of the Transparency International.

“A December 2019 report by the National Bureau of Statistics (NBS) on the patterns and trends of corruption in Nigeria revealed that young people are most likely to give or receive bribes.

“At least, 60 per cent of them admitted to have given bribes.

“This data when placed side-by-side with the high rate of youth unemployment and underemployment, 42 and 21 per cent respectively in the country has millions of young people finishing their studies with no job prospects.

“It further increases the pressure on them to offer bribes in order to secure jobs.’’

Mbamalu said with this, it became important to engage young Nigerians on how to fight corruption and enshrine integrity, accountability and transparency into the fabric of the society, and in the public and private sectors.

She added that as the group that suffered most from the effects of corruption, young people could be instrumental in the fight against corruption in Nigeria using peer influence to spread values of transparency and accountability.

She said that Yiaga Africa believed in the power of youths and students because they had the vibrancy, innovation and passion to effect change.

“At the end if the system fails, we all are victims of a failed system, so we need as citizens to begin to demand accountability and to ensure the government works for us.

“As young Nigerians especially, we have longer years to live in Nigeria so honestly not being interested in government is at our own peril.

“So we have more duty to come awake to our responsibility as young Nigerians and move with the spirit of solidarity in holding the government to account and in contributing our own quota to national development.’’

Mbamalu said that at the end of the competition, the debate teams would be encouraged to establish and strengthen public integrity clubs in their schools.

Mr Uchenna Igwe, the National Secretary, National Union of Campus Journalists (NUCJ) said that corruption had caused a lot of damage to Nigeria, although government put in place measures of anti-corruption, there was the need for citizens to get involved.

Igwe said that young people should rise to the occasion, and contribute to stemming the tide of the challenges that plagued the nation.

“We owe this as a duty to ourselves, and the children we will have in the years to come.

“If the Foundation of the issues we face today is consequences of the actions and inactions of the older generation, then it leaves little to imagination what would be if we do nothing today.

“I charge us not to be drowned by the illusion of “tomorrow”. Why wait for tomorrow to tackle the issues of today? Problem no dey finish’’.

Ubi said that for youths to prepare for their future roles as leaders, they should show interest in the present by interrogating policies and debate as a viable tool to use.

He said that universities had a role to play as a sector whose primary duty was the generation of knowledge for the development of society.

The first edition of the Bounce Corruption National University Debate was held in 2018, and 23 university teams competed at the zonal and national levels, with the University of Ilorin emerging the winner.