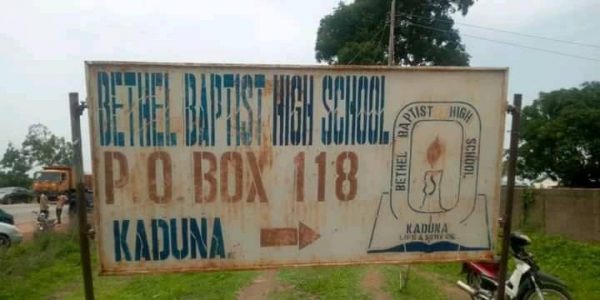 The school authority of Bethel Baptist High School in Kaduna has said 140 students were abducted in the school on Monday by bandits.

Speaking on behalf of the school, a school teacher, Mr Emmanuel Paul said the bandits stormed the school between the hours of 1 am and 2 am.

According to him, “from our records about 140 students are not in the school.”

The abduction of the students led to the blockage of the Kaduna-Kachia highway by hundreds of angry women and youths.

One of the parents, Caroline Emmanuel said, “I have only one child and my only surviving child and the Government is not doing anything about it.

“One thing should be noted, bandits have been killing us, they just entered Nissi community last two weeks, they came to my house, am telling you what I was thinking to know. They kidnapped people at Nissi, the bandits have been kidnapping people and killing them anyhow. We can’t even go to the farm, we can’t do anything again.

“Now they are coming to schools again. Enough is enough. Kaduna state should be declared a state of emergency if El-Rufai cannot do anything. He has failed. He is not doing anything. They just come blowing siren, they should go to the bush if they are serious.

“They have refused to enter the bush and a soldier is firing bullet here to disperse harmless parents, who are protesting on the road, carrying just leaves why should they fire bullets in the midst of aggrieved parents when they are supposed to be in the forest rescuing our children. Why, why?

“Since morning (yesterday), around 4 a.m that we were here, no soldier or police had entered the bush in search of the kidnapped students. But he is here firing bullets at innocent parents that are just holding leaves. For what?

“What kind of mistrust and betrayal is this, a state of emergency should be declared in Kaduna State.”

Another parent, Esther Joseph said, “It was around 6 a.m that they called me that, do you know that they have kidnapped some students in Bethel school?

“Please go and check. I was calling the teachers nobody picked my call, the security no one picked my call. It was the person I sent on Saturday to go see my daughter that I asked why is it that the management of the school did not close the school and relocate to Ungwan Boro.

“Why did they not relocate the school, a school that is located where bandits are carrying people. They should close the schools.”

However, another parent, Mr Amos Amtu, said it was a thing of gratitude to God for saving his child from being among the abducted students.

According to Amtu, “my son is also a student of the school and I was to return him back to school on Sunday evening but I got tired so I told him to relax till Monday morning, only to hear the news of the abduction when I was preparing to take him back. I am thankful to God.”

2023: Nigeria’s next President should come from the southern region – Southern Governors Forum