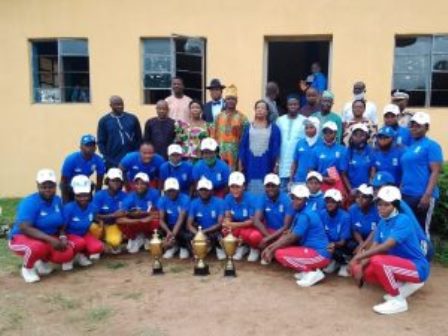 The UN Development Programme (UNDP) in its bid to complement government’s efforts of addressing insecurity and unemployment has trained 200 women and youth, victims of violence in different skills acquisition and empowerment in Ekiti.

Alao said that the programme facilitated by the UNDP and its partner, the Norwegian government, would help in the prevention of crisis and resolution of conflicts.

The Team Lead said that the platform was aimed at transforming the lives of beneficiaries selected from all the 16 local government areas of Ekiti.

He said that after the orientation programme the participants would still go through a six-month skill acquisition programme in trades and skills of their choice.

According to him, this will help beneficiaries gain lifelong skills and enjoy support for the establishment of small-scale businesses with starter pack grants.

Alao said equipping women and youth with lifelong skills and empowering them would “make them economically viable to contribute meaningfully to the development of their communities, states and country.”

“I am enthused to say that this programme will positively impact on these women and youth and will make them become self-reliant at the completion of the six months acquisition programme,” he said.

According to him, the candidates will begin their six months skill acquisition programme in the first week of June at the Ekiti Board for Technical and Vocational Education, (ESBTVE) Centre in Ekiti.

Speaking, the Ekiti Commissioner for Budget and Economic Planning, Mr Femi Ajayi, appreciated the UNDP livelihood scheme, especially because of its impact on crisis prevention and conflict resolution.

Ajayi said that for any meaningful development to occur in any society, efforts must be intensified towards prevention of crisis and resolution of conflicts.

“Business thrives only in societies where peace avails. Nigeria in recent times is faced with a lot of crisis resulting in insecurity thereby being a clog in the wheel of the country’s development.

“You will also agree with me that the effects of these crises have greatly demanded accelerated needs for improved social protection to close the gaps created by the menace.

“And, also to build a sustainable conflict sensitivity mechanism for the prevention of conflict occurrence at all levels of government,” Ajayi said.

According to him, the enrollment of 200 women and youth victims of violent conflicts in different skill acquisition programmes of their choice in Ekiti is part of UNDP’s efforts to ensure that Ekiti is at peace, thereby engendering development.

“Ekiti Government, under the current administration led by Gov. Kayode Fayemi, is well disposed towards development partners among whom is the UNDP.

“Since this government came on board, there have been tremendous and fruitful partnerships with the development partners in the state.

“This government is also committed to creating an enabling environment for intervention of donor agencies towards improving the well-being of the people of  the state.

“Fayemi subscribed to the UNDP programme to promote peaceful coexistence in the state in a bid to making Ekiti indigenes live a life of dignity,” the commissioner added.

The Ekiti Coordinator, NYSC, Mrs Mary Chikezie, urged the participants to see the programme as life time opportunity which should not be handled with levity

She told them that their utilisation of the leadership skills impacted on them through the training would go a long way to help them live a desirable life.

Also speaking, the President of Mediation Training Institute, (MTI-Nigeria), Mr Segun Ogunyannwo, lauded the UNDP initiative which he described as the best option to address the myriad challenges in the country.

He urged the state governors to key into the scheme and replicate the same in their different states to address challenges of security and employment and enhance their efforts of developing and stabilising their states.

He said that such a programme would not only help in job creation and provision of employment opportunities, but would also promote peaceful coexistence in their states and make them live a life of dignity as well.

A participant, Hanna Adebanwo, was full of appreciation to the UNDP for creating the opportunity for the teaming youth and violence victims in the state to learn skills and become entrepreneurs.

Hannah, a graduate of College of Education said that she had been at home for the past five years searching for a job but could not get, adding that the skill and entrepreneur training acquired at the programme would make her start a new life.

Also, another participant, Joseph Oluwabanse, whose family was a victim of herdsmen attack, also thanked UNDP for the training

Joseph, who said he learnt fashion designing, which would be completed in the next six months, said that the knowledge acquired in programme would help stabilize his life after the herdsmen crisis in his village.

He pledged to make use of the skill to positively impact the lives of other youths in his community by encouraging and training them in fashion designing after graduation. (NAN)