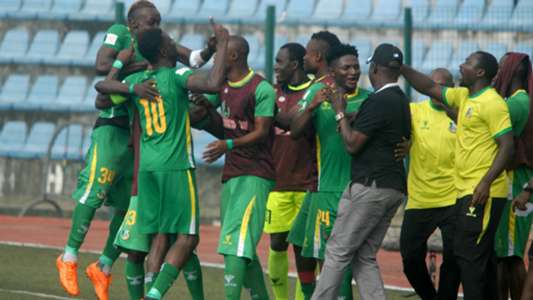 Katsina United have ended the unbeaten run of Akwa United in the Nigeria Professional Football League.

Before the matchday 29 fixture at the Muhammadu Dikko Stadium in Katsina, Akwa United were unbeaten in 18 league matches. A league record.

Losing 1-0 to Rivers United on matchday 28, the Changi Boys were avoiding back-to-back defeats when they filed out to take on the in-form Promise Keepers. The home side stayed true to their winning objective and it paid off in the 15th minute when they were awarded a penalty.

Samuel Kalu stepped up to the spot and scored. 1-0 and it remained that way till half time.

In the second half, the visitors tried all they could to get something out of the game. In the 71st minute, Charles Okafor sent a long ball to Akarandut Orok inside the box but the striker failed to convert the chance into a goal.

Katsina United won 1-0 and recorded their 10th win of the season. Unbeaten run over for Akwa United but coach Kennedy Boboye’s team still maintained the top position in the league.

In Bauchi, the early kick-off match between Wikki Tourists and Lobi Stars ended 1-0 in favour of the hosts. Mohammed Guda’s goal from the penalty spot sealed victory for Wikki, a team in desperate need of victories to avoid the relegation zone. They are currently 15th on the log.

At the Pantami Stadium in Gombe, Adamawa United showed they will not go down without a fight. The bottom-placed team beat Jigawa Golden Stars to record just their 5th win of the season.

At the New Jos Stadium, the star match between Plateau United and Enyimba Football Club of Aba ended in a goalless draw. As regards movement on the table, the result didn’t harm both sides so much but win for the People’s Elephant would have shot them into the top four. They are fifth on the log but tied on 49 points with Kwara United.

Sadly, another show of fans misconduct was displayed as some players of Enyimba were attacked and injured.

Dominant Home Wins
Since moving to the Ahmadu Bello Stadium in Kaduna, Kano Pillars are making it a fortress and getting better match after match. They have drawn just two games at the venue against Rangers and Akwa United.

After a disappointing 1-0 loss to Jigawa Golden Stars on matchday 28, Sai Masu Gida needed to get back to winning ways. Going against an unpredictable FC Ifeanyi Ubah team, Coach Ibrahim Musa’s team erased all forms of complacency to get the job done.

David Ebuka scored in the 27th minute was good enough to secure victory and give Sai Masu Gida their 15th win of the season, they are third on the log, tied on 52 points with second-placed Nasarawa United, and with their dominant home form, they are still a top contender for the league title.

Portugal Crash Out Of Euro 2020 After Defeat To Belgium