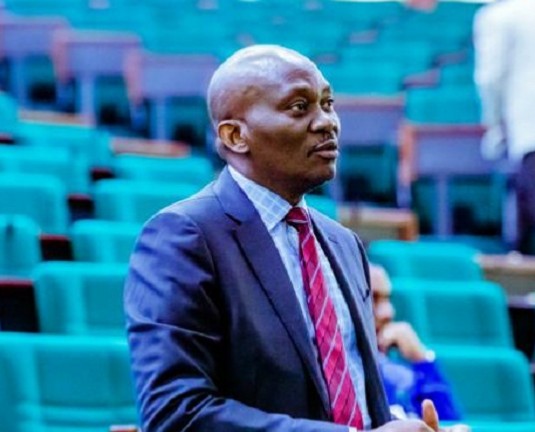 The Minority Caucus in the House of Representatives has condemned the suspension of Twitter in Nigeria by the Federal Government describing it as a clear violation of freedom of speech and other democratic rights and tenets as provided by the 1999 constitution.

The lawmakers, in a statement by the Minority Leader of the House of Representatives, Ndudi Elumelu, on Saturday, described the suspension as “provocative, obnoxious and unjustifiable”.

The caucus said it holds that the decision of the Federal Government in suspending Twitter “smacks of intolerance, insensitivity, and aversion to the views, opinions and aspirations of Nigerian citizens, especially the youths, on matters of state.”

They rejected the decision of the Federal Government which according to them amounts to a clampdown and a direct infringement on the rights of Nigerians to free speech as guaranteed by the 1999 Constitution (as amended).

They further described the suspension as suppressing of Nigerian citizens.

“It further shows the All Progressives Congress (APC)-led administration as one that is unwilling to listen to Nigerians but ready to use any means to suppress and subjugate its citizens.

“The Minority Caucus is disturbed that the suspension of Twitter in the country came after the social media platform deleted President Muhammadu Buhari’s tweets.

“Such response by the Federal Government has raised further concerns over the APC-led administration’s disturbing rating on issues of political intolerance, abuse of rights and violation of rules in our country.”

The action of the Federal Government, according to the Minority Caucus is coming at a time the National Assembly is conducting its public hearing towards the amendment of the constitution and may constitute a major setback capable of diminishing public confidence in the exercise as well as other processes genuine efforts by the legislature to strengthen democratic tenets in the country.

The Minority caucus, therefore, called on President Muhammadu Buhari to immediately reverse the suspension placed on Twitter so as not to exacerbate the already tensed situation in the country. 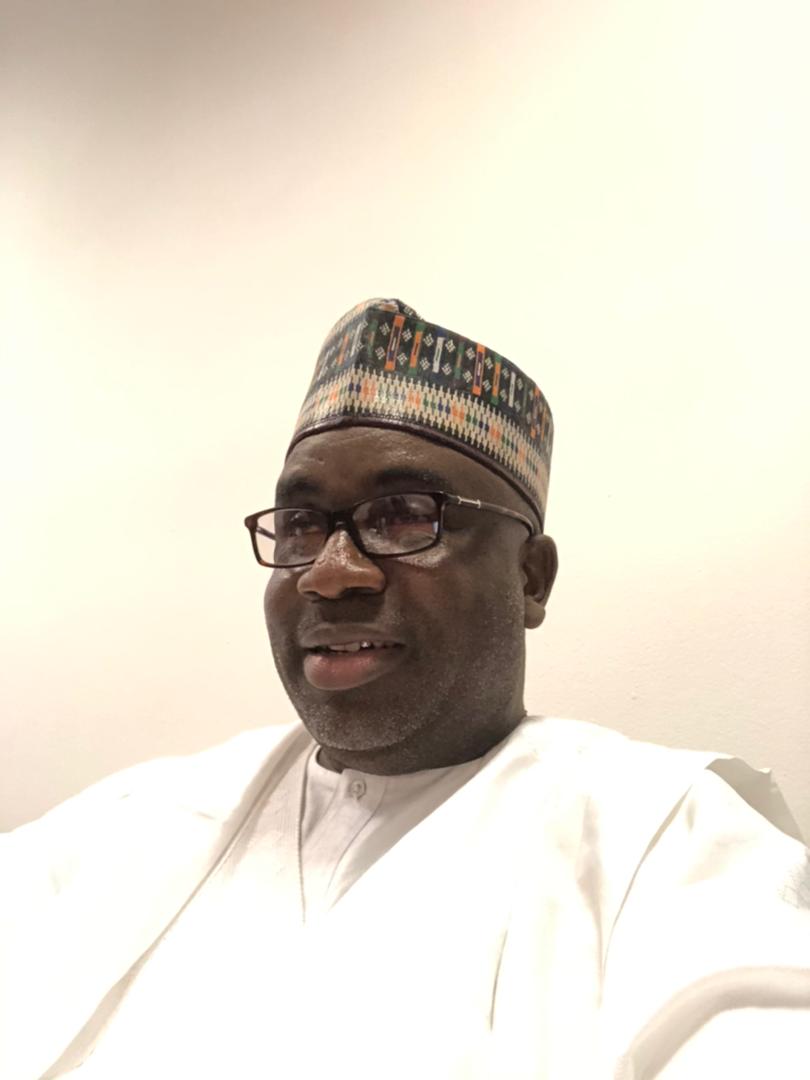 The Independent Petroleum Marketers Association of Nigeria, (IPMAN) has described the inclusion of the Petroleum Equalization Fund (PEF) in the newly passed Petroleum Industry Bill (PIB) as a clear demonstration of the sensitivity of the legislative arm of government to the yearnings of majority of Nigerians for a permanent solution to the energy problems of the country.

Speaking through the National Public Relations Officer Suleiman Yakubu in a statement made available to Newsmen in Abuja, The body stated that the entire content of the Bill as passed by the Senate last week would serve as a catalyst for the inflow of the much desired foreign direct investment to boost the economy.

According Suleiman Yakubu, “the much awaited Petroleum Industry Bill has come to ease Nigerians of the pains that necessitated the call for the Bill in the first instances.

“We observe with great delight that this Bill when passed into law would further solidify our support for the deregulation of the oil industry as a policy of government that would allow Nigerians to reap the full benefits of oil and gas which has been the greatest gift from nature to the country,” the IPMAN National Spokesman stated.

He also maintained that, “Notable among the clauses in the historic Bill is the Petroleum Equalization section which would remain a main factor to stabilize the industry across the country.

“If signed into Law by President Muhammadu Buhari as it was passed by the Senate, the Petroleum Industry Bill will change the landscape of the industry positively and above all, it would attract a smooth flow of foreign direct investments that would shore up the revenue base of the country and reduce the dependence of foreign loans to execute the nations’ budgets.

“The passage of the Bill by the Senate last week is a clear demonstration of the fact that our lawmakers are in touch with the masses and ready to play their role in easing the financial stress on Nigerians who were used to unstable pricing of commodities due to the unpredictable nature of fuel prices.

“We therefore want to thank the National Assembly under the leadership of the President of The Senate, Senator Ahmmed Lawan and the Speaker House of Representatives, Hon. Femi Gbajabiamila for presenting Nigerians with this tangible dividend of democracy and promising that as members of Independent Petroleum Marketers Association of Nigeria, we will obey every section of the law that would require us to make life easy for Nigerians after it is signed by President Muhammadu Buhari,” the Petroleum Marketers affirmed. 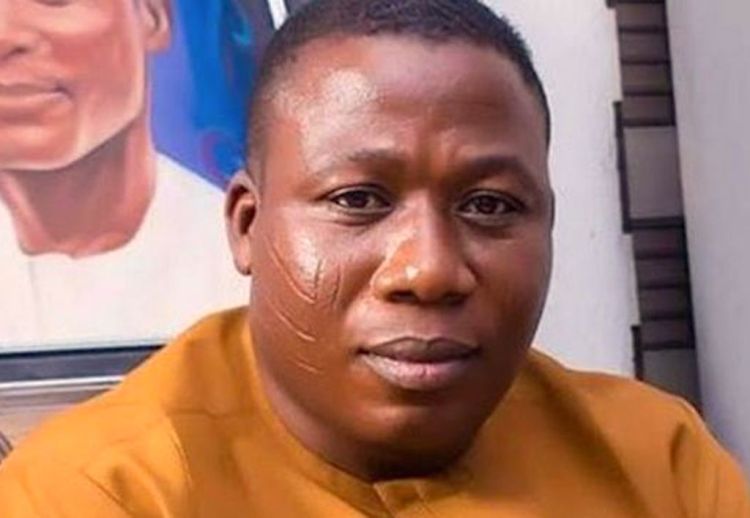 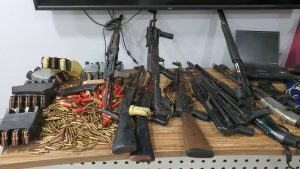 Some of the Recovered arms and ammunition

The Department of State Services DSS has said that a joint involving its men and men of other sister security agencies raided the House of Sunday Adeniyi Adeyemo Popularly called Sunday Igboho because there were intelligence reports that he Sunday Igboho had stockpile of arms and ammunition at home one of hisbresience.

Briefing Newsmen in Abuja while parading 12 men including a female arrested from igboho’s residence during the raid and other sophisticated arms and ammunition, Spokesperson of the Service Dr. Peter Afunanya said that about 0134 hours 1st July 2021, a joint team of security operatives raided the residence of Sunday Adeniyi Adeyemo at Soka in Ibadan Oyo state. 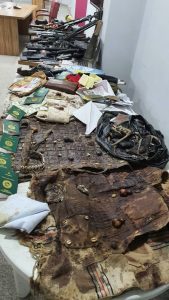 In his words, ” In the early hours (about 0134 hours) of today, 1st July, 2021, a joint team of security operatives raided the residence of Sunday Adeniyi Adeyemo a.k.a. SUNDAY IGBOHO at Soka, Ibadan, Oyo State. This was based on intelligence that he had stockpiled arms in the place. On approach to the residence, the team came under heavy gun attack by nine (9) men, suspected to be IGBOHO’s guards. Six (6) of them were armed with AK-47 gun and Three (3) others, with Pump-Action riffles.”

According to Dr. Afunanya, In the course of the exchange, two (2) of IGBOHO’s armed men were gunned down while the rest were subdued and arrested. Only one operative who was shot by the assailants on his right hand sustained injury. He has however received medical attention and is very stable. 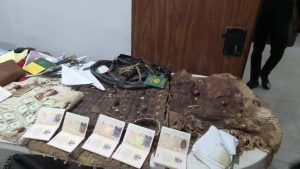 Different International Passport in his name and others

other items recovered from the residence of the self acclaimed liberator of the Yoruba Nation includes
A wallet containing Five (5) US Dollars in one (1) Dollar denomination; local and international driver’s licences in his name, ATM Cards, a German residence permit No. YO2N6K1NY bearing his name; Two (2) whistles; Fifty (5) Cartridges; Eighteen (18) Walkie-Talkies; Three Voodoo charm jackets/traditional body armour; Two (2) Laptops (One (1) Toshiba and One (1) Compaq); and his International Passport and those of many others.

He added that Further exploitation and forensic analysis are ongoing. 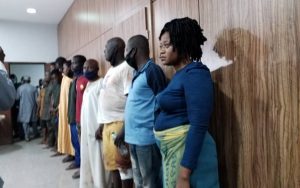 A cross section of the suspects

The DSS Spokesman said Aside the items recovered from the building, about thirteen (13) suspects including twelve (12) males and one (1) female were arrested and brought to Abuja. While one suspect is being profiled, the other twelve (12) paraded are:
Abdulateef OFEYAGBE, Amoda BABATUNDE aka Lady K (female) , Tajudeen ERINOYEN, Diakola, ADEMOLA, Abideen SHITTU , Jamiu NOAH, Ayobami DONALD and Adelabe USMAN. others include Oluwafelumi KUNLE, Raji KAZEEM, Taiwo OPEYEMI and Bamidele SUNDAY.

Dr Afunanya emphasized that the briefing and parading of the suspects became necessary in order to Inform Nigerians and the world that Sunday IGBOHO and his group, in the guise of campaign for self-determination, have become well-armed and determined to undermine public order. stating clearly the arrests and seizures are, no doubt, a confirmation of a grand plan by IGBOHO and his cohorts to wage a violent insurrection against the Nigerian State.

another Reason given by Dr. Afunanya is also to Alert foreign missions and licencing authorities within and outside Nigeria about the development and the possibility that IGBOHO could declare some of his permit and identity cards missing to seek their replacement.

Dr. Afunanya also hinted stakeholders that the Five (5) AK-47 assault rifles recovered from the building are suspected to be those collected by IGBOHO’s men from Nigerian Customs and Immigration personnel at Idi Iroko, Ogun State.

” The gun duel which lasted for an hour offered IGBOHO the chance to escape. Sunday ADEYEMO a.k.a Sunday IGBOHO is now on the run. IGBOHO may run as far as he can. He may hide as long as he wants. He might have attacked security operatives as his strength carried him. But this will be the end of his shenanigans. Soon, he will not have a hiding place. His strength will sure fail him. And the law will catch up with him. The law may be slow. But it will be steady” 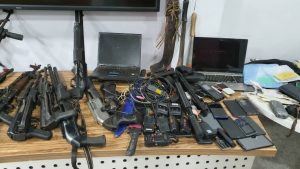 ” Consequently, ADEYEMO/IGBOHO is advised to turn himself in to the nearest security agency. Those cheering and eulogising him may appeal to or advise him to do the needful. He should surrender himself to the appropriate authorities. He or anyone can never be above the law. Meanwhile, those arrested will be charged accordingly” Dr. Afunanya said.

Kenneth Kaunda was one of the Greatest African Leaders — President Buhari. 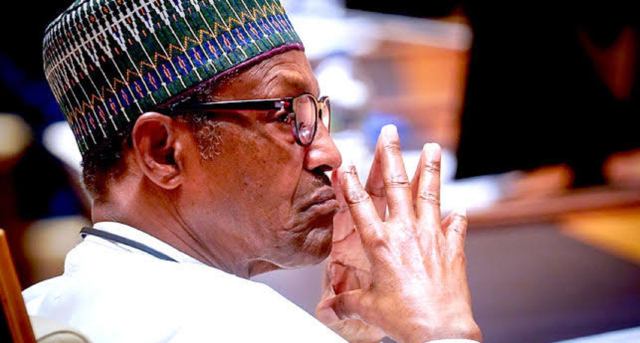 As the world mourns the passing away of Zambia foremost President and leader, President Muhammadu Buhari has described Zambia’s founding father and independence nationalist late Kenneth Kaunda as “one of the greatest African and world leaders of all time who loved his country and people profoundly.”

Speaking through his Senior Special Assistant on Media and Publicity Garba Shehu, The President who was reacting to Kaunda’s death at the age of 97 said “I have received his passing with great shock because I knew his contributions to the development of not only Zambia but also Africa at large.”

In his words , “we can’t forget in a hurry how Kaunda gave shelter to anti-apartheid freedom fighters from South Africa and from former Rhodesia.”

The Nigerian leader noted that “the late Kaunda was one of the loudest voices for the liberation of Africa from colonialism and imperialism and he did so with passion and sincerity. It is impossible to reflect on Kaunda’s legacy without acknowledging his selflessness and passion for service.”

President Buhari extended his condolences and that of the nation to the family, the government and people of Zambia over Kaunda’s death.