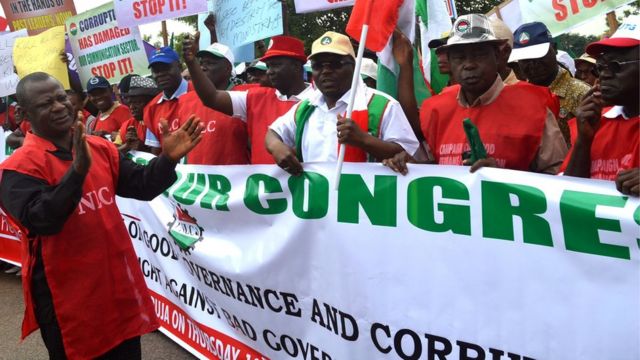 Normalcy has returned to Kaduna after the Nigerian Labour Union (NLC) called off its five-day warning strike to protest the sack of over 4,000 workers by the state government.

Reports have it that banks, schools, markets, and other businesses, including public offices, have been open for business.

Also, petrol stations and cooking gas companies which were hitherto closed due to the strike have been open with long queues as motorists and residents struggle to buy the products.

Electricity was also restored by the Transmission Companies of Nigeria and power has been restored to some parts of the state by the Kaduna Electric Distribution Company.

However, other areas like Sabon Tasha, Unguwan Boro, Mahuta, Lagos Streets among other areas of the metropolis are still waiting for the Kaduna Electric to restore supply as at the time of filing this report.

The NLC on Monday begun the five-day warning strike, a development that paralysed activities in the state, with governance and business owners counting huge economic losses.

But on the third day, the President of NLC, Mr Ayuba Wabba announced the suspension of the strike to pave way for negotiation as requested by the Federal Government.

“We will honour the meeting scheduled for tomorrow at 11 a.m. The labour leaders in Kaduna will also be present because they have the substance of the issues in the state.

‘The National Executive Council (NEC) meeting of the NLC would be held at the Labour House in Abuja on May 21, to review the warning action that was prosecuted in Kaduna state and determine further action.

Residents of the state have commended the federal government for intervening to end the disagreement between the labour unions and the state government.

One of them, Mrs Kubai Philip, who said she lost all perishable and other food items in the freezer due to power blackout, expressed joy that the strike was called off.

“Most of us incurred huge losses but thanks to the federal government intervention, our lives have been restored.

“Now that the strike has been called off, we pray the warring parties will reach a resolution because we will not want another strike again,” she said.

Another resident, Mr Ishaya Ayuba, noted that dialogue was the best option in addressing labour disputes, pointing that the masses suffer the most during strike action.

The suspension, the NLC President,  Ayuba Wabba was to  honour the invitation of the Federal Government on Thursday to mediate in the dispute.

Minister of Labour and Employment Chris Ngige waded into the ongoing face-off between the Kaduna State government and labour unions by inviting both parties to a reconciliation meeting.

The meeting scheduled to hold at the Ministry of Labour and Employment in the Federal Secretariat, Abuja is to be attended by Gov. Nasir El Rufai and top officials of the State as well Wabba and top NLC leaders. (NAN)