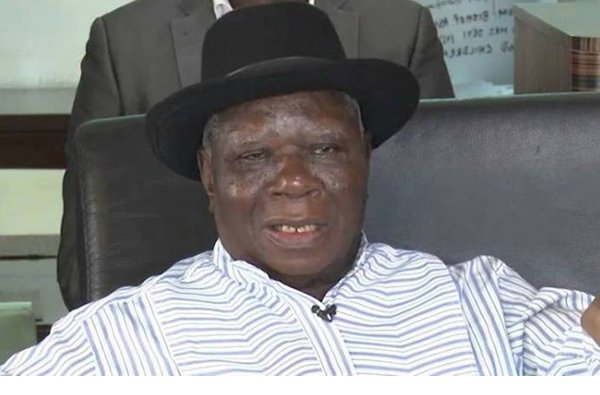 Elder statesman Edwin Clark has cautioned against calls for cessation in some parts of the country.

Clark told the News Agency of Nigeria (NAN) in Abuja that calls for cessation in some quarters were not the solution to the country’s problems.

He said he did not believe in Nigeria’s breakup in spite of rising insecurity and economic challenges in the country.

According to him, rather than fan the embers of war by making cessation calls, workable strategies should be evolved to solve the problem of insecurity and other challenges making life unbearable for Nigerians.

“Nigeria will remain one. Some of us do not believe in the call for cessation. Where do we go to, who are we leaving the country for, who owns it.

“We cannot flee, where do we go. Though I am seeing this danger but I do not believe that Nigeria will split.

“Recently 17 Southern governors met and they also agreed that Nigeria will remain one. They are not just PDP but also APC governors.

“Even during the civil war in 1967, we never believed Nigeria would break up and the war eventually ended in 1970.

“That was the nearest we got to breaking up but Nigeria did not break up,” he said.

The elder statesman called for restructuring rather than call for break up.

He referred to reports of the 2014 National Conference and the committee headed by Kaduna State Governor, Nasir el-Rufai, saying the recommendations would go a long way.

He said, “all we are saying is that we should restructure the country. Let us devolve power to the states. They should be the federating units.

“We should refer to the 2014 National Conference report of over 600 recommendations. We do not need to convoke another confab.

“The confab report in addition to what APC produced under Gov. Nasir El-rufai’s committee are enough to create a true federal system of government in Nigeria.”

Clark stressed that unless Nigeria returned to a federal system of government, as obtained in 1963, the restructuring process would not be complete.

“Let us have a federal system of government as we had in 1963. Once that is done, there will be peace in Nigeria. With that, every region will have a State Police.

“So, the only cure to the problem of insecurity in Nigeria is to return to the 1963 Constitution with a few amendments.”

He further said, “I have been in politics for about 70 years in this country and I have seen it all.

“In 1960, there was the Independent Constitution, drawn up in Britain by the Whites and Nigerians.

“They agreed that this country has more than 250 ethnic nationalities, therefore a unitary form of government will not work and that there should be a federation which we had.

“The 1960 constitution made it that every region had its own constitution and develop at their own pace and keep half of what is developed in their area.

“That was why Obafemi Awolowo was able to develop the West because we had the cocoa boom at the time. The price of cocoa was very high in the international market.

“So he was able to introduce free primary education which other regions could not do at the time.”

He blamed the military for the present economic and security challenges faced by Nigerians, saying the military changed into a unitary form of government.

“Aguiyi Ironsi changed this country into a unitary government.

“It continued until the Army handed over in 1999 and they left behind a unitary form of constitution.

On attacks on schools, Clark called for provision of security in and around schools through the building of fences and adequate surveillance.

He said that it might not be possible to guard all schools with the few number of security men in the country.

He advised that vigilantes could be employed to provide the Police with necessary information in the case of attempted attacks.

He, however, kicked against mounting surveillance cameras in schools, saying, “it will not work unless the people are ready to prevent kidnapping and other forms of attacks in schools.

“Even if we mount CCTVs they will be compromised as has happened on different occasions in some parts of the country.(NAN

Governors meet tomorrow, May 19 over Executive Order 10, COVID-19, others